Going In Style is a film that is pleasant and sweet but ultimately does nothing to satisfy you in the long run.

After losing their jobs and more importantly their pensions after decades of working, 3 old friends figure with that to save themselves and their loved ones they must rob a bank. Now they don’t have much to lose and also don’t want to steal more than they need though. This isn’t a greedy robbery but more so of retribution for a bank that takes their money and refuses to help them when they need it.  They get denied their applications for help and get their mortgage raised by cunning bankers and decide their very own bank must be the one that gets robbed.

Now the story isn’t bad, it plays it safe for the most part. The ending with how they played it all out and covered themselves turned out to be quite unexpected honestly. Unlike other films of this nature that rely on older actors getting together the comedy in this film isn’t similar. Don’t expect old man gags or Viagra jokes inside getting simple quips here and there. 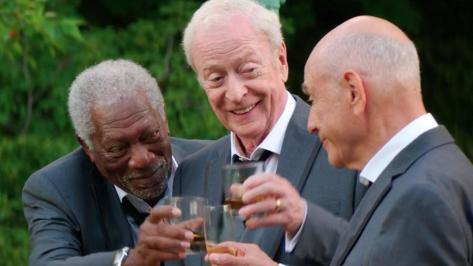 The main thing this movie has working with it is the cast though. Morgan Freeman, Alan Arkin, and Michael Caine are great together. Each actor as expected can actor without a flaw. What works the best though is that the on screen chemistry between the 3 of them is just natural. You can almost tell that during the filming of this these 3 were having a great time together.

Now like I said before, this isn’t a game changer or anything. It’s a enjoyable comedy crime film where 3 legendary actors seem to of had the chance to have fun together in a film. You’ll laugh but afterwards you’ll continue on forgetting most of it. Still worth the watch however.