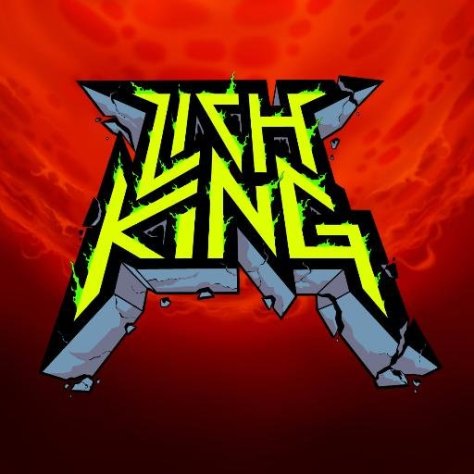 First off thanks for taking the time to chat, how are you? Let the people know who you are and what you do in Lich King?

Tom – Hi, thanks, I’m all right. I’m Tom, I write everything and do vocals and quit touring 2 years ago but am still kinda doing stuff. Sorry for taking so long to actually respond to this interview.

Brian – I’m Brian, I play drums and I do a lot of the boring behind-the-scenes manager-type stuff.

You have a new album coming out? Can you let any of the info for this one slip out? What can fans expect from it as well? Is it similar to previous releases?

Tom – This is THE OMNICLASM, and it’s coming out April 14th. We’ve released several songs that will be on it, and it’ll be consistent with our sound except faster, more aggressive, and with a bit more of a punk / crossover feeling. I think it’s the best album we’ve made yet. Early reviews seem to agree, while being dicks and stating that it’s more of the same.

Brian – Yes indeed, THE OMNICLASM is out April 14th. 10 tracks, 2 digital-only bonus tracks. Songwriting is still the straight-forward thrash you’ve come to expect from us, but production-wise we’re going for a more natural feel with totally real drums, no editing or quantification, a bit more raw and stripped down.

You’ve been on the hunt for a new singer, how did that go? How many bad (not joking bad) auditions did end up getting?

Tom – It’s not going well, honestly. I’ve been filling in for two years and the search hasn’t turned up anything worthwhile- there have been a ton of bad auditions. Like- oh my god, I think they’re not joking, they think this is good. It’s pretty appalling. This can’t be THAT hard to do. I only started doing it because I was the only one in the band at the time.

Brian – We’ve got a fair number of auditions – definitely a few bad ones as you’d expect, but a lot of them just aren’t quite what we’re looking for. A lot of mid-range death metal screams, and not enough inflection and defined pitch.

I know the art work for Lich King is done in house, where does the inspiration for it all come from? Do you try to tie the album cover into the music on said album?

Tom – Yeah, the cover always ties into the album’s LICH KING songs, where we tell the continuing story of our mascot as he tears across the land. This album’s art is indicative of where the story’s going.

Lich King is no stranger to shit talking online with your song “Black Metal Sucks” getting many people upset or at least discussing it. Did you ever expect that to happen? What would you tell the people that got upset over it?

Tom – I really didn’t think Black Metal Sucks would upset so many people, or even anyone. People really got bugged about it, and it’s probably what got us to this level. Sadly, though, it’s our weakest song. To the people that got upset, I’d say you’re proving our point by taking this all so seriously.

How important is your sense of humor while being in the band both on and off stage? You’ve had to upset a good deal of “serious” metal heads over the years.

Tom – I don’t know if it’s important. I go back and forth. On one hand, I feel like riffs are the only thing that matter, and lyrical content and stage banter are just frosting on the cake. On the other hand, I feel like the serious people ruin every hobby and need to be pushed back, because they appoint themselves as the sentinels of the art, and they’re not.

Brian – You’ve got to find humor and enjoyment in everything you do, or else it’s not worth doing. I appreciate bands that want to make a statement or project a certain attitude, but you can’t take yourself too seriously and you gotta let some humanity come through. It’s way more fun doing all the goofy shit and tongue-in-cheek humor that we do.

Any tour plans you care to discuss in 2017? Possibly hitting new places you haven’t been to before?

Tom – Europe in about a week, the continental USA this fall.

Brian – European Tour starts April 19th and goes until May 27th. Hitting a bunch of countries we went to last time back in 2015, plus our first dates ever in Portugal, Slovakia, and Poland. Expect a U.S. tour in the fall.

Can we please get Podcast Mosh back?!? It was one of my personal favorite podcasts to listen to.

Tom – It never went away! We just rarely bother getting together to make it. A new episode goes up today, I believe.

Brian – We’ll have a new episode next week, and part of it was our first Podcast Mosh in front of a live audience. It’ll be a big one. We know we’ve been slacking otherwise, but between recording and jobs and real life getting in the way it’s been tough to get together to podcast.

Anything else you’d like to throw out there before we call this quits?

Tom – One of my favorite swears right now is “oh turkey toots.”

Just like to thank you for taking the time to talk and I wish you all the best in 2017.