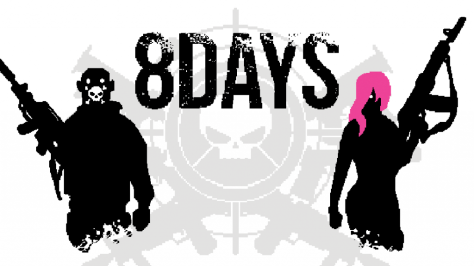 If you are looking for your next super tough game to make you want to throw your controller then look no further than 8Days.

Similar to such games like Hotline Miami, 8Days is a top down twin stick shooter. You play as a merc who after breaking out of prison but run and gun his way to save his life.

Let’s just straight into the main point of the game though and that is that 8Days is unrelentingly difficult. Not even in a way that will challenge the player to become better, 8Days difficulty almost feels death is just something to repeatedly expect. You have 3 health bars in the game so after 3 hits you are dead and must restart. Death is handled differently here though as a new screen acts like a checkpoint, so if you start a new screen with one health bar and die you’ll restart with one health bar. This easily provides some of the more hair pulling moments of having to get to a new screen having only one health bar.  So in cases where you only have one health bar and a screen full of enemies that all seemingly have precise aim, 8Days truly shows you it doesn’t mess around. 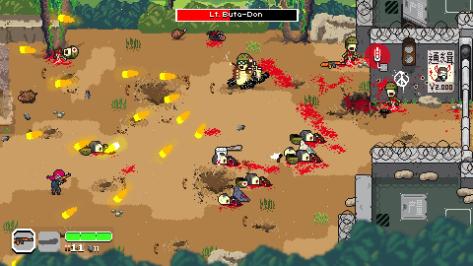 The game while being extremely hard is still fun and can be fun. After clearing a screen you feel accomplished, it’s just the faults within that screen that show. Level designs aren’t always great with no cover given sometimes. They even give you the chance to sneak past some enemies expect they always end up spotting you. You never become too overrun with a gang of enemies but here even one enemy sometimes feel like your overrun. This falls into the size and amount of bullets you’ll have coming at you.

Visually however the game looks like a old time game. It’s very pixelated and honestly looks good and reminds of other newer games like Broforce is the visual department.

Overall 8Days is fun when you don’t end up getting stuck over and over in a section with no ammo and no health. While a challenge in a game isn’t usually a downfall in 8Days it almost is. The extreme diffulculty will turn away casual and even some more hardcore gamers. At the times that you do succeed here you will end up feeling like you accomplished something though.