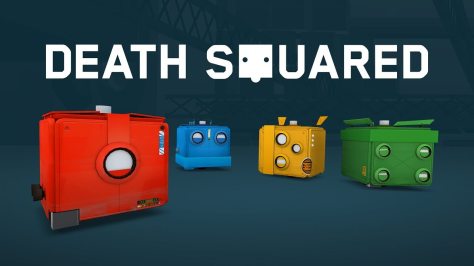 Death Squared is a simple puzzle game that while taking tiny hints from other games manages to be fun, but never go far beyond making itself an average puzzle game.

The game at it’s core is simple enough, each player controls a different color cube (or in single player you control it all) and you must make it to the goal ending in one go without dying, falling off, or anything that would end your cubes life. Once later levels come in you soon see that certain color cubes can deflect lasers, walk over clear platforms, activate lifts, etc. What helps here though is that the cubes and everything involved is always color coordinated through the entire game making it easy to see especially since puzzle difficulty starts to go up drastically.

While the overall story is nothing to talk about really, there is at least some banter between cubes that at times can be somewhat humerus to listen to. Think of it as like a “Portal” lite. 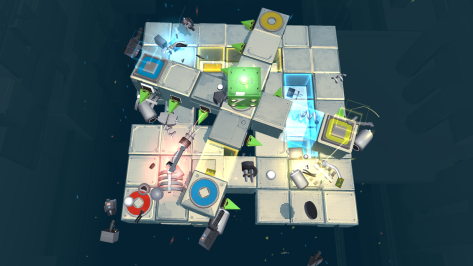 Coop is a focus of the game and having not been able to test coop, the game does offer a single player way where each analog stick controls a cube. This ultimately leads to a much more challenging game. The difficulty isn’t even just to blame on the sometimes overly harsh puzzles you will come across but the task of having to remember how to control each cube with a different analog stick. On completion however it does feel good to realize you completed a level like that.

As a whole the game controls well but it does have its flaws with that as well. With the weighty nature of your blocks, even the smallest movement can completely wreck your run. I found myself falling off the map many times due to a tiny movement and while it wasn’t always the games fault, it quickly became tedious and annoying. The game expects you to fail over and over, it just becomes a pain when its the end of the level and you discovered what to do and a simple quick movement has you restarted the level over.

Overall the game isn’t bad at all. You’ll have some fun and certainly a great challenge with it. It just isn’t a game meant to be played a lot or for a long period of time. While there are certainly many levels, most won’t find themselves wanting to see it through till the end. Even with offering some new features the general game play just doesn’t stand out enough to get itself to stand out.