First off wanted to thank you for taking the time to chat? For those unaware let the people know who you are and what role you play in “Night Demon”.

ND – The pleasure is all mine. I am Jarvis Leatherby the singer, bassist and songwriter for Night Demon.

How did the band come to be formed? Night Demon is a great name that also feels like it could have been a metal band from years ago, how did the name end up happening?

ND – We started for fun in 2011. Never really thought the band was ever going to be anything serious for us. Little did we know, things took off and the rest is history. The name is cool and I have always liked it. I remember when I searched online to see if there was ever a band with this name, I was astonished that I couldn’t find a single one throughout history. I guess we lucked out on it. It is a total cliché heavy-metal name, but we’re heavy metal band. Ha ha

Your first full length “Curse Of The Damned” came out in 2015. How do you feel the reception for the album has been? What are you favorite songs from it to play live as well.

ND – The reception was beyond belief. We got the top of the polls and many publications, I need an album of the year in five different ones. The fans also seem to really like it. We toured for a full two years on the album, and went to Mexico twice, South America, two full year of tours, and four US tours. It has really been a great experience, and we are confident that we have spread the word of Curse of the Damned all throughout the world. It’s now time for some new music & new world tours!

ND – Yes, we have an album coming out April 21 titled”Darkness Remains”. The first single and video for the song “Welcome To The Night” has just been released.

Night Demon tours quite often, do you enjoy being on the road?

ND – Yes we toured quite a lot! The road is very very tough at times, however the reward of being on stage makes it all worth it.

You have an upcoming tour with Anvil coming up, are you looking forward to playing to a new crowd with them?

ND – Yes most definitely. We love those guys are good friends with them and always have a good time. We are also looking to see many of our loyal fans at the shows, the tour has already started and we are seeing those exact results.

Any other tour plans you can talk about happening this year?

ND – Soon as the Anvil tour ends, we will hit the road to go to Europe for six weeks, come back to the states for a couple festivals, then back to Europe for another month, then back home to host our own festival “Frost And Fire” in October 2017.

From the cover of “Curse Of The Damned” to some lyrics, Night Demon has some darker themes with it? Where do you get inspiration from?

ND – Mainly just from stuff like comic books, horror movies, and just heavy metal life in general. It’s not over thought at all but we do like to make it interesting.

What music has influenced your life as well as the music that you make? How does your personal music tastes blend with the tastes of your fellow band members?

ND – We generally seem to like the same stuff, but we all listen to all different styles of music. As far as heavy metal gpes, the new wave of British heavy metal is by far above and beyond our biggest influence musically. We have been fortunate enough to live through many different eras of heavy metal, so we take influence from all of it really.

While some may consider the band to have a sound similar to NWOBHM bands, do you feel Night Demon fit in there? There are clear influences from other genres as well though.

ND – Ha ha! Exactly I kind of answered that on the last question. 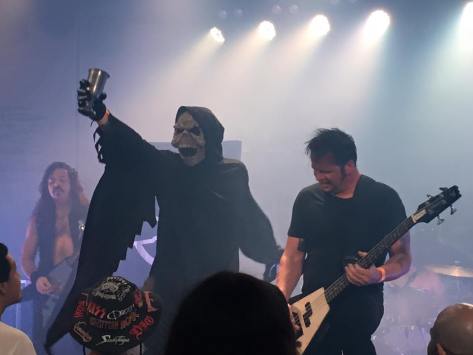 Having played for a wide variety of big bands, who would you still like to play with? Have there been tours or shows where the musical styles are different between bands but didn’t go over well?

ND – Well obviously we would like to tour with some of the big dogs like Iron Maiden, Priest, and Metallica but that has yet to come about. There are a lot of other underground bands that are really great that we like and are always taking offers from anybody who wants us. We did a tour with Carcass, Crowbar, and Ghoul and that is definitely a departure for us, however it went over better than most ones we have been on. The more extreme metal fans seem to enjoy Night Demon a lot. Maybe because of the classic sound that they grew up on.  The younger friends had their  favorite bands already screaming at them, so it’s a nice change for them to hear a band like us that is heavy but still has a lot of melody in it.

You are on Century Media Records which doesn’t have bands of your style really. How did that come across and how has the partnership been so far?

ND – The A&R and the president of the record label came to see us a lot and are developing stages. They liked what they saw and they definitely like the work ethic of the band. They also love the music, which didn’t hurt at all. The partnership with them is been amazing. And I really really enjoy working with them. They do a lot of things for us behind the scenes and help me out with a lot of the desk work that needs to be done in order to be a successful band.

ND – My favorites would have to be the original Fright Night, Salems Lot, old-school Universal horror classics, a lot of hammer horror movies, and I would have to say Return Of The Living Dead is definitely one of my all-time favorites.

How do you feel the modern horror films are? Have you seen any lately you’d like to recommend?

ND – It’s really hard to say these days. There are a lot of remakes being made, which are never as good as the originals. And a lot of the newer ones I’ve seen have had such small budgets, that it’s hard to take seriously. I’m still always on the lookout for new stuff, so if any fans out there have any suggestions please send them my way.

Before I let you go is there anything else you’d like to put out there?

ND – Just want to tell all the young bands out there to keep going, and follow your heart. If music is your passion there is no ceiling. Just go for it. Do it do you can’t do it anymore.

Just want to thank you again for taking the time to chat and I wish you best on the Anvil tour and in 2017.

ND – Thanks again, please come say hello when you come to a show.