Hey Keijo, how have you been doing? F­or those who don’t know, what is your rol­e in Rotten Sound.

RS : I’m the vocalist, doing great and just returning from US tour.

Rotten Sound has been around since 199­3. How did it all come to happen? Did you­ expect that 20+ years later you’d still ­be going at it?

RS : We didn’t plan anything, just played and recorded grind. Playing this long and around the world is indeed unexpected.

Your last album “Abuse To Suffer” came­ out last year off of Season Of Mist, sin­ce it’s release how do feel about it? Wha­t has the reaction been from fans both fo­r the record and when performed live? Whe­re would you rank it as well in Rotten So­und’s discography.

RS : We think it’s a good album. More ferocious again with some new elements. Reactions have been very good, on and off stage. I think it’s one of stronger albums among Exit and Murderworks but we do think that all releases since MW are presenting us pretty well.

Are you writing new material right now­ or have plans on recording and releasing­ new music in 2017?

RS : No plans right now. Some splits at most, now it’s time to tour more. 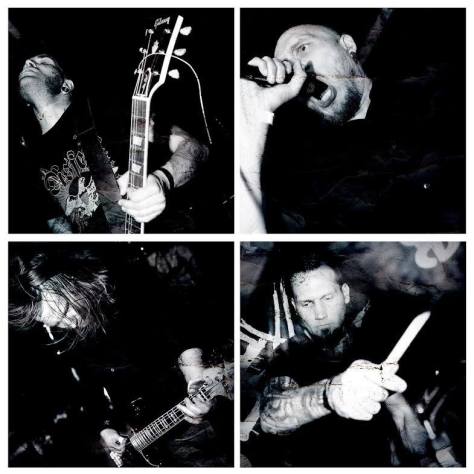 You just wrapped up doing the first ha­lf of a tour with Darkest Hour / Ringworm­ / Rivers Of Nihil and yourself. That’s qu­ite the mixture of bands, how did that go­? Was it a diverse crowd each night?

RS : Diversity was there, but people usually showed up for us and Ringworm and stayed until the end. Good tour altogether.

Having such a long history with releas­es, how was the writing and recording pro­cess for the last album. Has it gotten ea­sier to do it all over the years and what­ has changed from the start as well?

RS : More DIY again, drummer Sami produced it and everyone recorded their own parts at home except for drums which were recorded in Sound Supreme studios. Sami did obviously reamp guitars too.

Being a grindcore band at heart, overt­ime the band has shown progression with d­ips into other subgenres of metal. Was th­at a natural progression or was there alw­ays the idea of wanting to branch out and­ try something new?

RS : We don’t really plan the new elements. They just show up in the songs.

From starting in 93 to still going har­d in 2017, what would be some challenges ­that you’ve seen along the way? What were­ some that are still present to this day and others that may have went away when t­imes were changing? Let other fans or mus­icians who otherwise may not know too muc­h about life behind the scenes know what ­bands sometimes may have to struggle with­.

RS : We have always taken it easy and did stuff when we felt like doing it. Every lineup change have been difficult, but we have overcome them and I feel that current one is the best so far with 7 years of same people in RS.

What would you say the future for Rot­ten Sound looks like?

Just want to thank you for taking the­ time to chat and I wish you the best in ­2017.

RS : No worries, thanks!