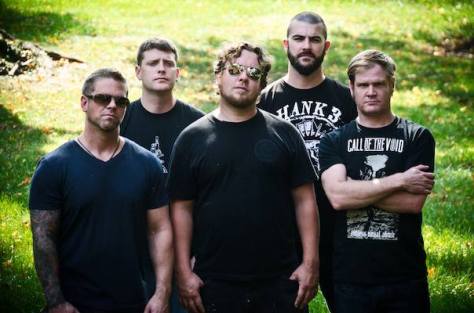 Hey Blake, first off thanks for taking the time for this. How have you been doing? For those unaware as well let the people know what you do in Pig Destroyer.

PxD : I’m Blake, I do noise/ samples and some other stuff in Pig Destroyer

With the last album “Book Burner” having come out in 2012, does it still shock you at all thinking of the high praise that album is held to still to this day?

PxD : Is it held to high praise? Ha! No, we’re all very appreciative of any accolades that we get. I mean, we write what makes us happy and kinda just do it for us. That being said, no one wants to record an album and have everyone think it sucks.

Can we expect any new music from Pig Destroyer in 2017?

PxD : Hopefully, we’re writing currently, and have some songs written, but it’s not done yet.

Are you still shocked to be in the music scene all these years later?

PxD : Yes and no, I love doing this and playing this music, and it’s certainly not our “career”. If it was our career, I think we’d have been done awhile ago. Who knows, we never set out to do anything but what we do, so it’s a little surprising

Between using various samples, guests, and just making some fast grind music, what is the process of making a Pig Destroyer album?

PxD : Wow, this is a tough one, Scott demos stuff and we go from there. We usually discuss what direction we want to go in, and as far as what I do, there’s some trial and error.

Being a band that doesn’t do full tours either, usually resorting to short week or weekend runs. What can expect tour wise from the band in 2017?

PxD : Well, we have some stuff lined up, Chicago Open Air, Decibel Metal and Beer fest and Roskilde in Denmark, after the record is done, who knows.

With Pig Destroyer being looked at as some of the pioneers of grind, what are some modern bands that you feel are carrying the torch and pushing the genre forward?

PxD : Wvrm from South Carolina, Gendo Imari from the U.K., Call Of The Void, Vermin Womb, I’m really digging Eel from Pittsburgh too.

Can we expect anything new with Hatebeak in 2017? New album or possible shows?

PxD : Shows? Ha, no way. Hatebeak has a split in the can with Richard Christy from the Howard Stern show/Death. We’re loooking for a label to put that out (hint hint) and our last LP is still available at www.reptilianrecords.com

Anything you’d like to say before we end our chat?

PxD : Just thanks for all the support over the years, we love doing this and appreciate that people like it.

Just want to thank you again for taking the time to chat and wish you the best of luck with everything in 2017.

PxD : Awesome! Thanks for the interview!